The Bitcoin Cash community is raising funds for node software development. On 17 June, the donation counter for Bitcoin Unlimited suddenly jumped from 5 BCH to 305 BCH. The 300 BCH came from the single transaction a0f28991dfe01bf7b56e38ee6c61b49f593c2f3aa4b548379276a56bc1c95740, whose 30 inputs were all shuffled with the privacy-enhancing CashShuffle technology.

Combining multiple shuffled inputs is a known limitation of CashShuffle. So is this donation truly anonymous, or can we figure out the source of the funds? Read on to find out.

To start our blockchain analysis, we first need to specify a mathematical model. To break CashShuffle, we need to link outputs of CashShuffle transactions to inputs of the same transaction, which in turn are outputs of other transactions. We start at the donation to Bitcoin Unlimited and work our way back. Doing so, we encounter various types of transaction outputs:

• The donation output: For the final transaction that makes the donation to Bitcoin Unlimited, all 30 transaction inputs are certainly linked to this destination.

• CashShuffle change output: A change output of a CashShuffle transaction (output index 5 or higher) is linked to the inputs that have amounts greater than but closest to the amount of the output. (The difference is the contribution to the transaction fee.) Almost always this links to one input with 100% probability, except when some inputs have equal amounts.

• Output of single-input transaction: Any output of a regular transaction with a single input is certainly linked to that input.

With these rules we can work out the possible origins of the donation. Using the probabilities, we can compute for each origin what the expected number of paths to the destination is, and the expected amount contributed to the destination. Summed over all possible origins, these will add up to 30 paths and 300.73989064 BCH, the sum of the input amounts in the donation transaction.

After processing 3704 transactions, this leads to 296 possible origins, with 4798 possible links between transaction outputs. Ordered by the expected number of paths, the top 15 is as follows: 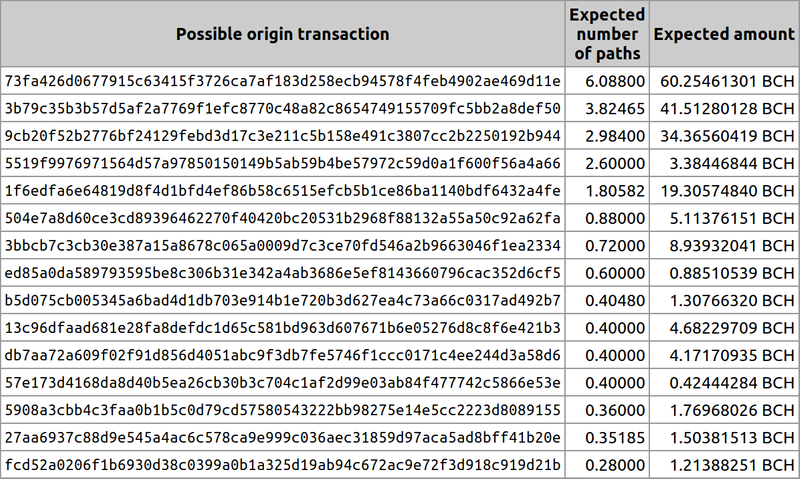 The elimination of origins

The former result is what we get: one origin is left, with 124 possible links:

Our main scenario has one origin

It is possible to develop alternative scenarios by manually eliminating this origin at the start of the process. This yields a more complex scenario with three origins, with 616 possible links:

An alternative scenario with three origins

This could be of interest if one can somehow establish a connection between these three origins. However in this case our original scenario with one origin turns out to be very plausible. 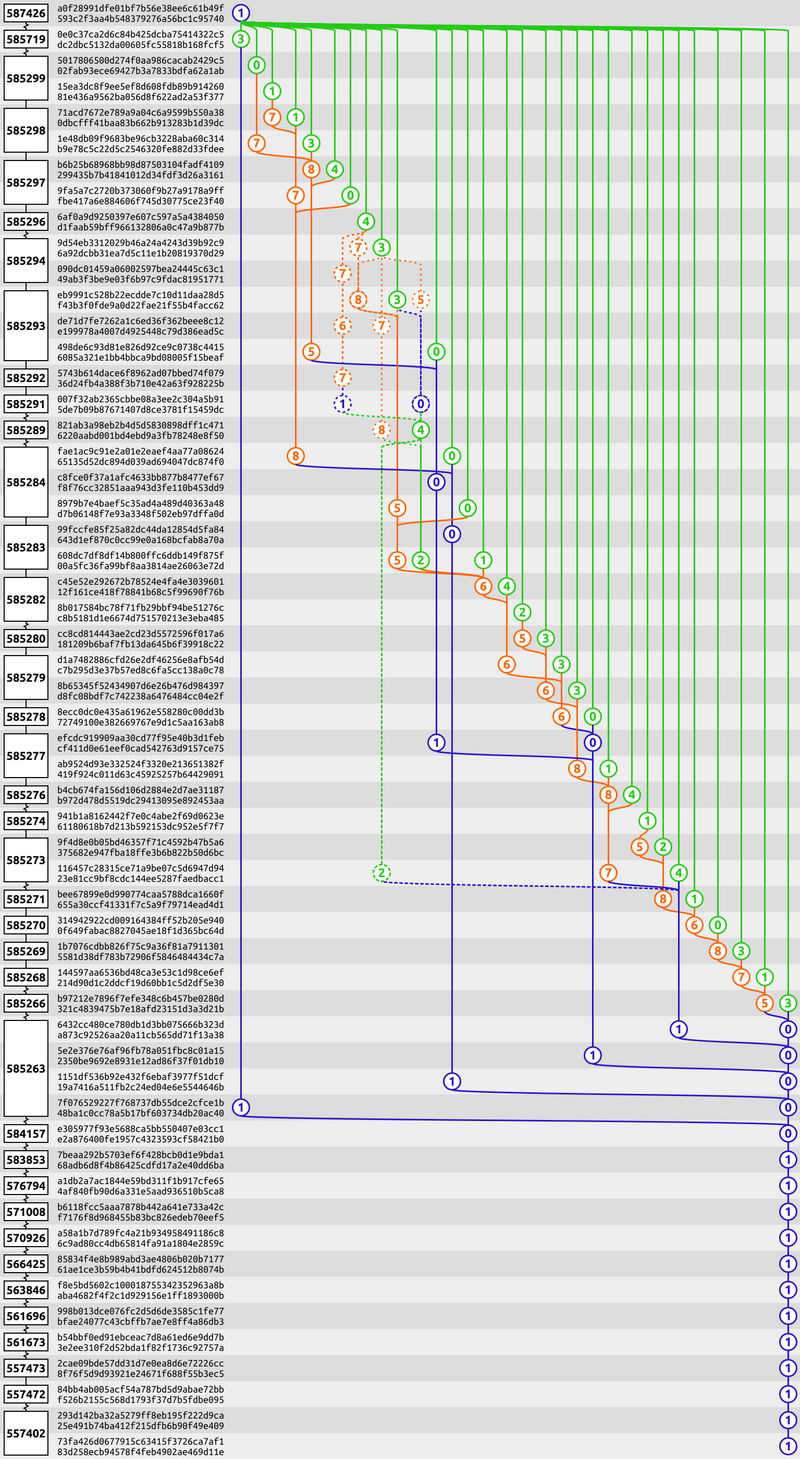 CashShuffle shuffled outputs are drawn in green, CashShuffle change outputs in orange, and all non-CashShuffle outputs in blue. While the origin of all funds is certain, some intermediate links are still uncertain; the outputs and links with an expected number of paths smaller than one are dashed. Upon close manual inspection, it is revealed that CashShuffle transactions 116457c28315ce71a9be07c5d6947d9423e81cc9bf8cdc144ee5287faedbacc1 (block 585273) and 608dc7df8df14b800ffc6ddb149f875f00a5fc36fa99bf8aa3814ae26063e72d (block 585283) have one certain shuffled output and one uncertain shuffled output linking to the same input. Since the input can only link to one shuffled output, the link to the uncertain output cannot be true. Elimination of these impossible links results in the following final graph:

This is the final result of our blockchain analysis. It has no more uncertain links. We can clearly see all funds were shuffled exactly once. There were also some manual transactions before and during the shuffling, using funds that had not yet started shuffling.

The (direct or indirect) origin of the Bitcoin Unlimited donation is hereby identified as Hodler XXII. Mission accomplished.

To get better CashShuffle privacy yourself, you can avoid combining inputs into a single transaction. In this case, you could make 30 separate donations with one input, instead of one large donation with 30 inputs. When depositing into exchanges, you can similarly make separate deposits instead of one large deposit, as long as you make sure to generate a new receiving address for each deposit. For a long-term user-friendly solution, we will likely need some extension of the CashShuffle concept to allow private consolidation of multiple inputs, for example CashFusion.

We thank the Blockchair API for providing the transaction data for this research.

RE: Blockchain Analysis Versus CashShuffle: Tracking the 300 BCH donation to Bitcoin Unlimited

RE: Blockchain Analysis Versus CashShuffle: Tracking the 300 BCH donation to Bitcoin Unlimited

RE: RE: Blockchain Analysis Versus CashShuffle: Tracking the 300 BCH donation to Bitcoin Unlimited

The method currently relies on a manual plausibility assessment of any generated scenario (i.e. by inspecting the DAG). The model does not compute p-values for hypothesis testing, it only computes probabilities of origins conditional on the exclusion of other origins. Also you want to keep an eye on things not (yet) considered by the model, such as addresses and other transaction types (e.g. I decided to add the processing of single-input transactions to discover more links between origins). Surely this can be further developed and extended with more traditional blockchain analysis techniques, I just put this together in a week.