In light of the recent Bitcoin Cash block time swings, it seems good to review the performance of inflation control on Bitcoin Cash. The figure below displays bitcoin’s block height error over time, with respect to what the block height is supposed to be, assuming 144 blocks per day. More blocks than scheduled means more inflation than scheduled. A horizontal line means 10-minute blocks on average, as intended. An upward-sloping line means blocks are faster, whereas a downward-sloping line means blocks are slower. 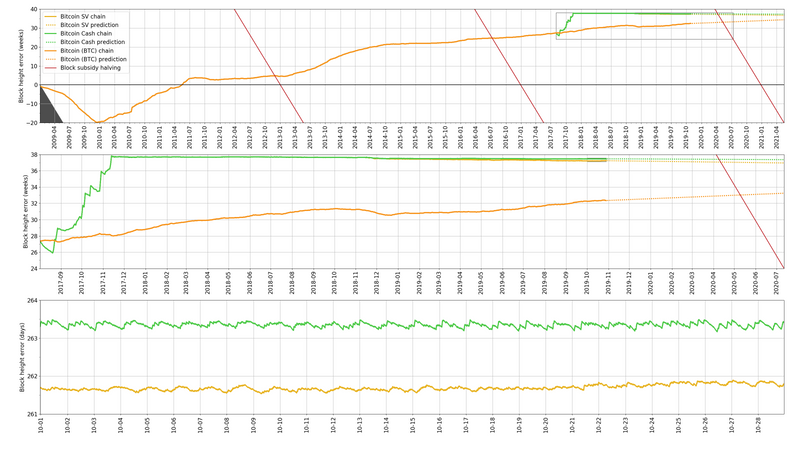 The current Bitcoin Cash Difficulty Adjustment Algorithm (DAA) is controlling inflation just fine. Bitcoin (BTC) has always suffered from mediocre inflation control, currently being some 32 weeks ahead of bitcoin’s original inflation schedule. This became much worse after the creation of Bitcoin Cash, but since the DAA replacement in November 2017 Bitcoin Cash’s inflation control has been excellent. Bitcoin Cash constantly stays about 263 days ahead of schedule, while Bitcoin (BTC)’s deviation from the schedule still varies unpredictably subject to hashrate changes. (Which indeed caused me to mispredict the order of halvings in a previous iteration of this analysis.)

The last few days are no exception. Despite considerable swings in block speed, Bitcoin Cash accurately maintains an average of six blocks per hour - a horizontal line in the figure. Any intentional induction of block difficulty swings is thus a zero-sum game. If anything, it’s more likely to be a negative-sum game than a positive-sum game, considering that the large hashrate changes during the Bitcoin SV “hash war” pushed the block height errors of both chains a bit down, reducing inflation.

In conclusion, the block time swings on Bitcoin Cash are no reason to worry about inflation. There may be concerns about degraded user experience and miners gaming each other, but unlike other parts of bitcoin’s history, there is no indication of miners gaming the house.