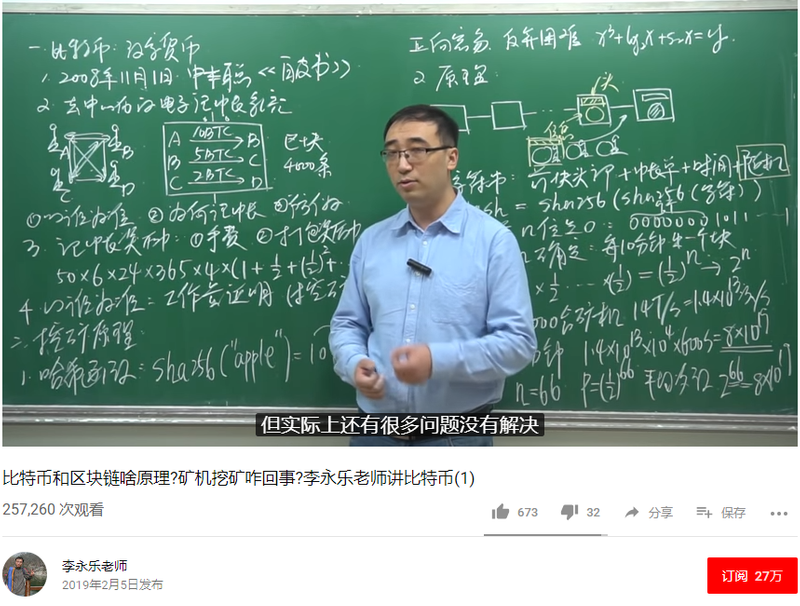 A short video of a high-school teacher introducing bitcoin and blockchain has become one of the top topics on social networks in China these days, with many bitcoin KOLs (Key Opinion Leaders) commenting and retweeting.

In the 15-minute long video, a dour man dressed in a blue shirt with black-rimmed glasses is standing in a classroom, explaining what bitcoin and its underpinning technology blockchain are in a readable way just as a teacher tells his students about a new and complex notion.

The video has been viewed over 500,000 times with nearly 5,000 comments left below within days since its release Feb.5 on a popular short video platform, becoming one of his most popular videos and a crypto phenomenon on the platform where the young generation love to hang around.

The “nerdy” online celebrity, with over 900K followers on the aforementioned platform, 2.6 million followers on Weibo(Chinese version of Twitter) and 270K subscribers on Youtube, is actually a famous math and physics teacher at the High School Affiliated to Renmin University of China in real life. Named Li Yongle (“李永乐” in Chinese), he is good at putting abstruse notions of academic subjects, especially those in mathematics and sciences into simple words, which helps popularize science to the average persons and even wins the likes and retweets from CCTV news and People’s Daily, both are state-run official media.

Mr. Li’s brief introduction has stimulated people’s interests and desire for bitcoin knowledge, many viewers leaving their doubts and questions about the philosophy of bitcoin after watching the video.

“What’s in the very first block?”“So bitcoin is just a string of numbers? Then how can I have it turned into numbers in my bank card?”“Bitcoin mining would consume huge energy?”“OK, now I see what it is. But the central bank would kill it.”

Regarding this, a Weibo user in the name of Yuwan BTC summarized,

0, Mr. Li is quite capable in making complex notions simple;1, There’s a lack of such preachers in the Chinese crypto community;2, A majority of people who claim they know about bitcoin actually have a scanty knowledge of it;3, There’re still a lot of newbies in the crypto space despite the bear market;4, Controversies about Bitcoin still abound, but it has improved a lot compared with the situation two years ago;5, The move is good for everyone.

Prior to it, Chinese celebrity Gao Xiaosongalso introduced bitcoin in an episode about ancient currency in his talk show, which hit millions of viewership. The move of Li, as a high-school teacher as well as a public figure, would help educate more people about bitcoin and promote blockchain and bitcoin to more young millennials in the country.

Amid the crypto winter, it is inspiring that people from all walks are standing up to popularize bitcoin and educate more ordinary people about it. According to 8btc, Li Guoqing, former CEO of Dangdang Inc.(Chinese version of Amazon) has pivoted to be a blockchain preacher, aiming to earn 100 million yuan membership fee in the first year from his blockchain book club and content sharing.