For a while I've been verbally promoting the idea of being able to monetarily promote my ideas, for example… Honest Cash's #1 Priority?

Give me some ideas. What should happen if a user upvotes her own post? We could place the posts in a promoted section sorted by $, but… where should the money go? Constraint: http://honest.cash cannot take it because of legal reasons. feature #1 according to @Pragmatarian.

Why can’t honest take it? I remember Yours took the money when users voted on their own posts so wondering what the legal issues are. With that said, do I dare suggest “proof of burn”?

1. Promotion is a service, there needs to VAT (in Germany) paid and an invoice issued.
2. The cost of booking 10–20 cents transactions in accounting is way higher than 10–20 cents

CryptoWyvern#116 suggested that the money be given to charity.

Giving the money to a charity isn't a terrible idea, but my preference is for the money to be given to Honest Cash.  I really want HC to grow!

Here are a couple solutions to the accounting problem…

1. HC can sell "upvotes" in a block.  For example, I could buy 30 "upvotes" at the same time, and the money that I spent on this block of "upvotes" would be used for accounting purposes.

On Facebook, the term for monetarily promoting your own posts is "boosting".  A couple hours ago I spent $30 dollars to boost this post… 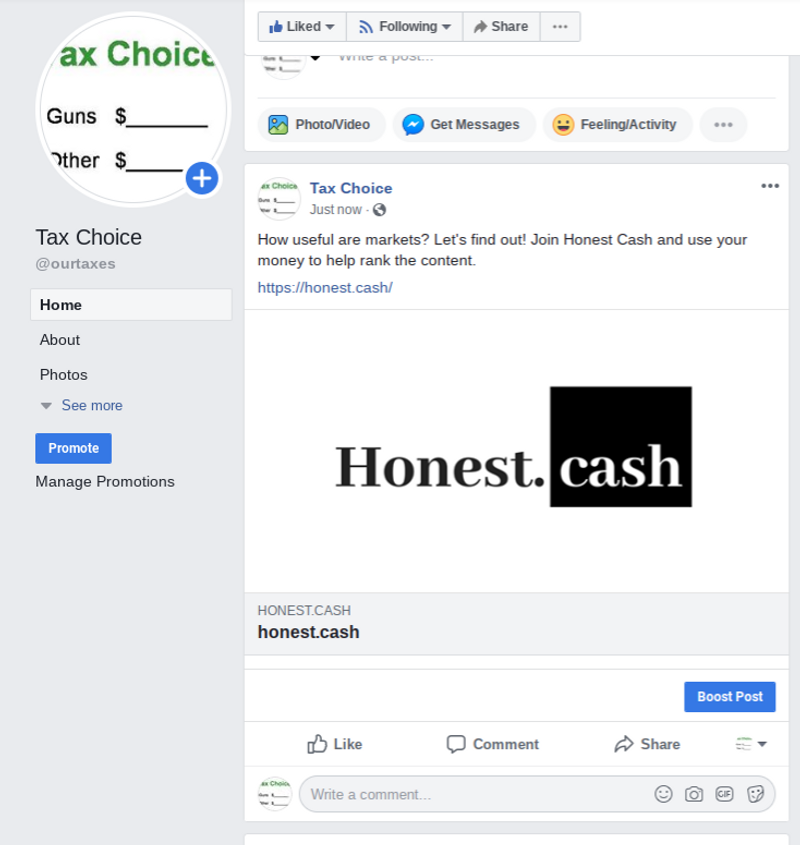 I clicked "Boost Post" and selected the target audience…

… and then I selected the budget… 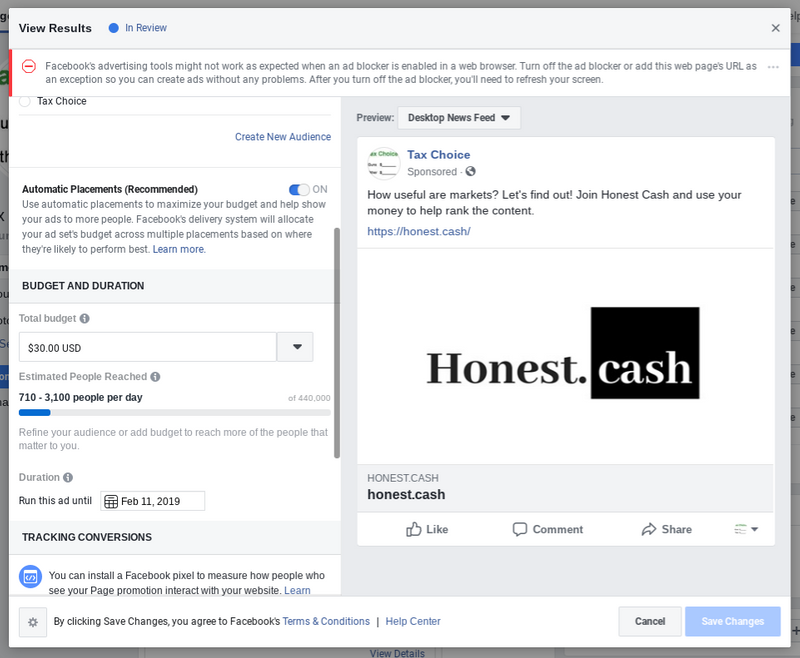 FB is still reviewing the post/ad so I haven't technically spent the $30 dollars yet.

What if Cain and Adrian each want to spend $10 dollars to help my FB post/ad reach an even wider audience?  Their only option would be to give me the money directly so that I could spend it on my post/ad.

I think virtually all creators want their creations to be seen by more people, so it really doesn't make sense for HC to have a separate section for self-boosted posts.  Any posts not in this section would be the posts that the creators themselves didn't consider deserving of even a small boost.

Google has sponsored results above its organic results.  HC has crowd sponsored results, and the creators should definitely be able to spend their money to improve the rankings of their own creations.

Heh. Yeah, it's true that there are a lot of scams out there, which is why FB is dumb for not giving people the opportunity to boost other people's posts.  It's one thing for Adrian to boost HC, and it's another thing entirely for Cain and I to help boost HC. If we boost HC then we are essentially vouching for it with our money.  The more people who use their money to vouch for HC, and the more money that they are willing to spend, the less likely it is that HC is a scam.

Look at this quote thing below that I can't seem to get rid of. This is a problem, but it's a relatively small problem, and I'd really prefer for HC to focus on the big problems first, so it's very important that I have the opportunity to use my money to help HC prioritize.

RE: Promoting Your Posts

Your suggestions are really worth considering. I quite like the Bounty feature on cent. I confused that  with seeding in our telegram.. could a bounty get dispersed to a set number of upvoters that also leave a reply on HC post?

Bounties Shouldn't Be A Priority

On Cent the bounties are distributed by voting.  If you want voters to distribute your money, then that's fine.  Personally I'd prefer to decide for myself how my money is distributed.  So if I attached a bounty to my post, I'd want the option to decide how it's distributed among the replies.  In order to keep me honest I shouldn't have the opportunity to put my bounty back in my wallet.  It would stay attached to the post until I distributed it.

For me though bounties aren't a very big priority.  A bigger priority is to display all our "upvotes" on our profile page. And the biggest priority is to be able to spend money on our own posts.

RE: Bounties Shouldn't Be A Priority

Yes, I see your point - being able to see more information (about upvotes, etc) in notifications would immediately enhance the way we go about engaging one another. wrt 'spending on ones post', I tend to see the placing of a bounty as a way to boost ones post because the effect is to attract readers and engagement. The sorting of that, I think should remain distributed rather than in the hands of the original poster. I may act in an honest manner, but another group may game such a system and gain a boost in exposure while also grabbing all the rewards along with it. Methods to anonymize comments might go a distance toward frustrating such collusion to game any reward distribution by multiple users. it's very interesting all the same.